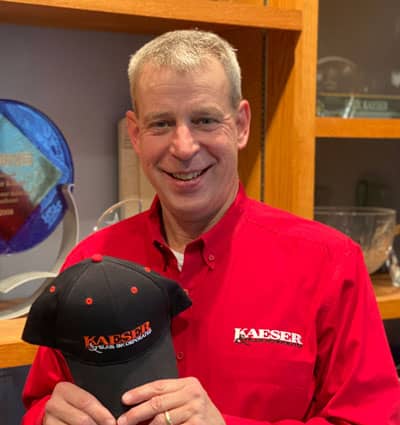 Kurt Kaeser is the Chairman of the Board, Chief Executive Officer and President of Kaeser & Blair, Inc. Kurt started working full time at Kaeser & Blair in 1983. When Kurt become CEO and President in 1996, he reaffirmed the Company’s commitment to preserve the traditions that are responsible for the longevity and success of the Company. Integrity, responsibility and reliability.

The Company’s growth strategy is focused on his dedication, devotion, and orientation to providing its business owners superior service and profits in the promotional products and advertising specialties industry.

Under Kurt’s leadership, Kaeser & Blair has helped its business owners grow sales by an average of about 15% percent per year over the last three years despite significant economic headwinds. Kurt is a champion of business owner growth and constantly strives to maximize their profits and resources.

Kurt was born and raised in Cincinnati, Ohio. He attended Wittenberg University and has worked in every function and department of Kaeser & Blair, Inc. He is the 3rd generation of his family to lead the Company.

Kurt resides in Cincinnati, Ohio, with Liz, his wife of 26 years. They are the parents of two grown children, Brad and Mitchell, who also work for the Company.